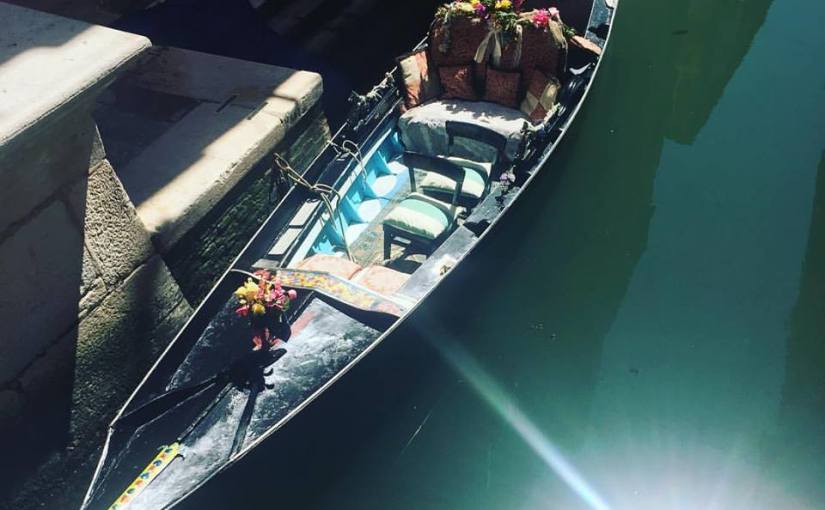 Last weekend I did something I’ve been wanting to do for years – go back to Venice. It was twenty-five years ago that I was first bewitched by the place, swearing I’d only go back for a romantic break with someone ‘special’. That person didn’t rock up, so goddammit, I went there by myself. I booked a cool, boutique hotel, planned my four days out using Lonely Planet, and re-entered the fantasy world of the city.

What I’d forgotten is that it’s like entering a restaurant on a perma-Valentine’s Night. The place is festooned with love and lovers, now taking ‘kelfies’ – my made-up word for kissing selfies. In front of every building, work of art or bario serving spritz … there they were. I didn’t really notice it last time I was there – I was too entranced with the place. Also, I was young enough to think I’d have my time there to do that. Lol.

So really, what I was doing was the Iron Woman Challenge of all solo holidays. Going to the most romantic place in the world as a middle-aged woman on her own. “I can totally do this!” I thought. And I did. Kind of.

I managed to dodge the rose-thrusting touts around St Mark’s square, and chuckled when I heard an American woman behind me cry, “Do I LOOK like I’m with anyone??” That’s the thing when you’re a female solo traveller. You suddenly realise that you’re surrounded by them. We’re quite well-camouflaged, actually. No one suspects the woman blending into the surroundings looking like she’s just waiting for someone, but we see each other very clearly, emerging from the scene. And there are more and more of us every year, it seems.

Even at the airport I’d gone to the champagne bar and made eye-contact with at least three other women doing the same thing as me: treating ourselves to a lovely glass before jetting off, because we could. I spoke to one of them and she was going to Berlin, but not before sneezing all over me and giving me a cold three days later. Thanks, love.

Anyway, on my first night I was full of the joy of being alone and free in the most beautiful city in the world. I’d planned a walk around San Marco, which would culminate in a spritz at a bar I’d been recommended. Of course, Venice being Venice, I couldn’t find it so I found an accommodating restaurant – the Rosa Rossa – who found me a table tucked away outside. I smiled at my good fortune and ordered a spritz.

Fifteen minutes passed and couples were starting to surround me. They appeared to be being served promptly so I reminded the waiter (he seemed to be the manager) that I’d been waiting for fifteen minutes. He broke out in what can only be described as operatic ritual humiliation of me in front of the other customers. Waving his arms around, he remonstrated with me, shouting that I’d only been waiting for five minutes and couldn’t I see that they were busy and now, you see? Here is the drink you’ve been waiting for. Prego, PREGO!

I died a little in my seat. I also sat there for about five minutes choking back tears. He came back out to take my food order and instead of doing what I should have done – stormed off – I told him I’d order if he promised not to shout at me. It was the worst meal I’ve ever had in Italy, for so many reasons. The couple next to me looked shocked.

Thinking about it, what annoyed him about me was probably that I was the least important of his customers, but the one that ventured to complain. Had I been in a couple, I’m sure I’d have been served immediately. Had I been a girl of twenty-four, as I had been the last time I visited, I think he’d have been all over me. But me, just sitting there, at forty-nine, with no man or baby to make ‘sense’ of me, just got his goat.

I placed a review on TripAdvisor as soon as I left the restaurant. His reply says it all:

So there it is, for all to see. It was definitely fifteen minutes because I’d checked in on Swarm as I arrived and looked back at the time. Maybe those minutes fly by when you’re in a couple, but I’m betting a manly cough towards the waiter would’ve got him running.

If you’d like to see the restaurant in question, and the review, now read by over 200 people, then here’s the link. Note that all the subsequent rave reviews are from couples and groups. Sadly my review didn’t link to my usual profile, where I’ve posted many rave reviews of hotels and restaurants. I’m pretty sure this is the only bad one.

It happened again on my return boat trip to the airport. The boat driver shouted at me for trying to pay at the wrong moment. I teared up again. So this is what happened in twenty-five years – I’ve gone from being  catcalled to shouted at. I’m in the way.

Don’t get me wrong, in between those moments, the weekend was a dream of renaissance art and architecture, of La Traviata in a palazzo on the Grand Canal and Vivaldi in a frescoed church. It was cicheti and wine in a tucked-away street ‘bario’ and a pistachio gelato next to a fantasy-scene of sparkling waterways and winking gondoliers. It was everything I remembered the first time, but much more. And I’m going to go back.

And when I go back I’m going to remember the conversation I had with a woman who was visiting the city with her husband. He’d gone off to do something else and she’d taken a seat next to me in a bar, and was taking a breather with a beer and a cigarette. I told her about my solo-travelling thing and why I’d got into that and she suddenly blurted out that she too was wishing she was on her own, and that she was thinking about leaving her husband. She probably only told me because I was a complete stranger, but I did start to wonder about all the kelfie-taking love-puppies I’d seen in gondolas. How many of them were wishing they were with someone, or no one, else?

I remembered feeling like that on numerous holidays, even my honeymoon, and felt glad that at least I was free of that. Free of scanning every place I went for the guy I was ‘supposed’ to be with. It’s exhausting, and at the very least, unfair on the person you are actually with.

So Venice. I came, I saw, I conquered. I am so in love with you that I don’t think I can leave it at that. You can make me feel elated and transcendent, but you can also make me feel like dirt on your shoe.

But at least I feel alive in your presence.