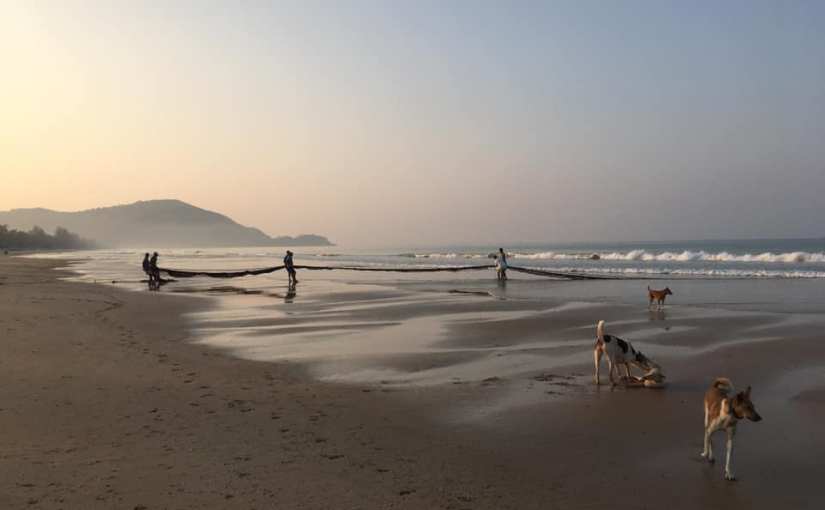 After the seismic activities of last week in Agonda, it’s been a fairly calm and restorative one. Partly because I’ve slipped back into doing morning yoga at Sampoorna Yoga School and using the office there a few mornings a week. It’s lovely to feel part of the yoga village again, and to catch up with a few yogi friends.

A dog that used to run in and out of class during my training has now been adopted by the school – it’s a bit sad to see him chained up in the morning, but I can see why he is. His unbridled joy when he’s let loose towards the end of breakfast time is a sight to behold – he sprints round and round the restaurant.

It’s taken a while for my beach dog pack to realise who I am again, but finally Sanjo and Zimbo (who live at Jardim do Mar on the beach) have resumed their customary massive run at me every morning and follow me down the beach. They caused a bit of doggy mayhem by following me all the way home this time, upsetting the dogs that patrol the main street outside Kopi Desa – Zimbo looks so upset when I don’t ‘save’ him from them as any good pack leader would.

After last season’s dog bite, I’m not taking any chances, so I carry a bamboo stick in the morning on my beach walk. That’s the time when the dog population of Agonda is at its most lively and whilst they’re probably playing with me, sometimes that play turns into a biting match. They’re quite rough with each other, so you can see where it comes from. The stick works as a preventative measure – I don’t intend to start using it, but it seems to ward off unwanted attention just by having it. Even my pack are a bit wary of it.

One of the highlights of this week was walking past my two pig neighbours who were fast asleep and making cute snuffly noises. I heard that their piglet had died in a bike accident so I hope they managed some trouble-free sleep. Bless them…

This week I’ve witnessed the early morning catch a few times, when the fishermen of the village pair up to drag the nets in by man-hauling them ashore. I’ve only ever seen them when the nets are already in and on the beach so I didn’t know that this is what they did each morning. It’s like watching a silent tug-of-war as two teams of men haul each side of a net in to the beach.

The full moon earlier this week caused some really strange happenings on the beach. One on day, the tide seemed to be sucked right out all day only to be thrown back at the beach at sunset. Even Vasudev was worried about his boat – I saw it pitch violently as it came back to shore on the crest of a big wave. I knew it was a tidal thing, but it did an the eerie pre-tsunami feel to me.

The town has been very quiet in the wake of the cyclone and the demolitions that took place last week and I have spent some time fighting the scaremongering that’s going on about Agonda online. “It’s a war zone,” said one British guy, annoying me so much because it’s still the beautiful town and beach it always was, just minus his favourite bar. I can see people talking about not coming here because of what they’ve heard and it makes me so angry – Agonda needs the tourist business more than ever and people are so ready to desert it just because their favourite bar closed. I am pretty sure it will have recovered by Christmas.

Yet again I’ve met some interesting people this week. Peter the ex-teacher and psychologist who has a particular interest in left- and right-handedness, swam with me for a bit at ‘rock beach’. He talked to me about the ‘tyranny of the right’ and how we are all unconsciously persuaded to use our right hands to write. Being a leftie I am so glad my parents let me use my left hand after a short period of ambidexterity as a child. I think they did that because my uncle had been left with a stammer after being forced to use his right hand as a child.

At Sampoorna I’ve also met Meritxel and Adri from Spain who are running Yoga Sin Fronteras (Yoga Without Borders), a non-profit organisation bringing yoga to disadvantaged people around the world. I’m so impressed with their drive and optimism, I’ve been lending an editorial hand on their website. It’s one of those ideas that you think should have been done already. The best ideas are always like that.

And finally, I can reveal that I have found a Secret Swimming Location. I have found it difficult to swim in the sea so far (dolphins spotted right at the shore’s edge this week!) because of the huge full moon waves and general fear, but I have been granted access to a small pool where I can practise my new swimming skills in peace. I’m not sharing the location because technically I’m not supposed to be there, but boy, I’m glad I am. The water is freezing cold and when I float on my back I can see a circle of palm trees and eagles (they look like kites) soaring above them. Perfect after a hard day at the office…