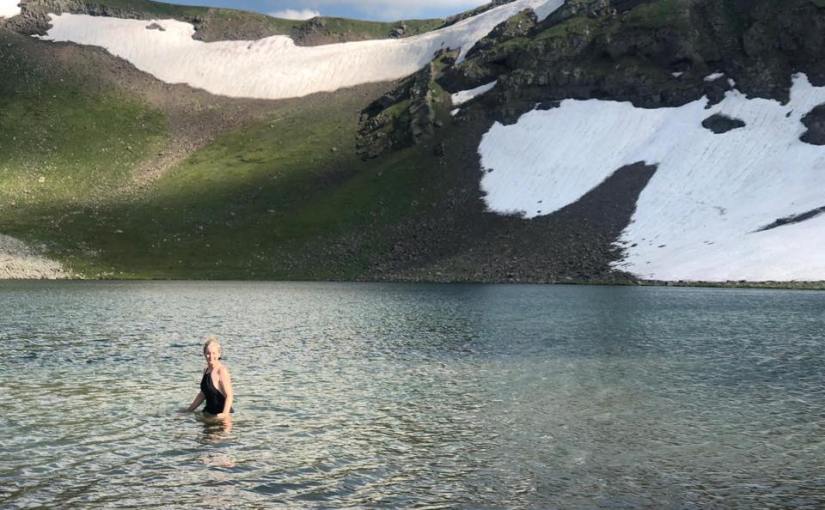 I’m sitting in my empty flat in north-west London, with just a rucksack, a suitcase and a yoga mat to accompany me for the next six months. I’m moving to Agonda in Goa, and you’re coming with me, metaphorically speaking. I’ll be doing the same thing as I do here – freelance editing and yoga – but with the added features of a beach location and tricky wifi.

If you’d said this is what I would be doing a year ago I would have laughed. In many ways, I was at what I thought was my peak – great career, adventurous holidays (Kyrgyzstan!), a tribe of publishing and hiking friends, a lovely little flat in a gold building and yoga classes nearby. Why live any other way?

Shouldn’t I be at home looking for a massive job?

And then I met people who’d jumped off the corporate train and were walking along the tracks, stopping wherever they felt like it. What are you going back for? they asked. I couldn’t explain then but I can now.

I’ve been learning to swim this past year, and last night I had my final lesson. I can now swim lengths of the ‘big pool’ and not panic at the sight of the deep end. I can dive in the deep end, in fact, even if I belly-flop. I can do breaststroke, finally, and it’s now my favourite stroke in my repertoire with front crawl, backstroke, dolphin and treading water.

Until the past month I’d get close to the deep end and feel a rising panic in my gut which would see me clinging on to the side of the pool taking short, sharp breaths. Each time, I’d wonder why I was doing it – I was perfectly capable of carrying on swimming, but my brain would tell me I couldn’t, and that I should hold on to the side for a bit. Then I’d think, why did I feel the need to do that?

When I got back to the UK in June this year, that’s how I felt. I got back to my flat and clung to the side. And then thought, why did I feel the need to do that?

I needed to come back to know that everything was ok here (apart from a dried-out loo bowl), and that I could re-enter my former life. But it wasn’t the same. I hiked in Georgia and Armenia on pre-booked trips and was injured on both. I did yoga almost every day until I realised my body couldn’t cope with that much and had to pull back. I had residual problems in my hip and shoulder related to work stress. I knew this summer was the end of me pushing myself too far, the end of me punishing myself for some unknown sin.

I’d realised in India that western life, and it’s root in Christianity, is all about the guilt and the punishment. When I came back I could see how easy it was to fall back into the cycle of self-flagellation. Must work harder, must play harder, must do yoga until something breaks, must climb that mountain, must must must must… Our yoga course director said that yoga injuries are more prevalent in the west because we push ourselves too hard. In London, I see yoga classes advertised with ‘it’ll make you sweat!’ because people here need to know that it’s a workout before they’ll attempt it.

I have spent the summer getting rid of all the things I clung to during that former life, that I thought were giving me comfort. I gave away my wine racks and bottles of spirits, I sold things I didn’t value or use any more and I gave clothes and books away to charity. It has been the most liberating action of my life. Now my stuff fits into a small container which will be kept in the UK and I know that every single thing in it is of use or value to me.

The impending move has also brought my most cherished friends to the fore, and saying goodbye to them, week by week, has made me realise how much they mean to me. Their support and kindness has blown me away – I can see it and them more clearly now.

I felt emotional after the van left this morning with all my worldly goods aboard it – including my mum’s crockery and my dad’s Maasai spears. I went for a walk in the park and just sat with a cup of tea, listening to the wind in the trees.

I’ve done it, I thought. I’ve let go of the side. Even if I panic a little, I know I can simply float on my back and breathe. I can let the waves carry me.

2 thoughts on “Learning to Swim”