I’ve already written a lot about body image, about embracing my own shape, eschewing dieting, and women’s relationships with food. Before a female-only dinner I went to recently, I joked on Twitter that there should be a Bechdel test for women’s dinners where at least two women talk about something else other than food while eating. It never happened. Someone turned up and promptly announced how many calories they’d burnt off at the gym and it was all over.

This policing of food intake, both by ourselves and by the media, drives me mad. It’s taken me forty-eight years to realise I don’t have to be thin to live a happy life, that I haven’t fallen into oblivion by stopping dieting. I have gained around 20lbs since my decade of dieting in my 30s, and have gone back up to the size I was before the dieting kicked in.

I honestly went into a panic as the scales showed a significant increase earlier this year. And yet every time I looked in the mirror, naked, I saw a body I liked. How can this be? I panicked myself into another low-carb diet. It didn’t work. The panic subsided and the body I liked was still there. Rounder around the tummy, thighs and upper arms, but it actually looked like the shape it was meant to be. Some clothes didn’t fit, some clothes fitted better. I filled out the bits that were meant to be filled out. This made me laugh with joy a few times, getting ready to go out.

I think my body is lovely. Am I allowed to say that? Damn right. For years I thought it was bloody disgusting and thank god that’s over. There are men (and women) who’ve only known me as post-dieting Lisa and they say such nice things about my body. I’ve had them call me things like ‘full-on woman’. They’ve commented on my shape, and called it ‘beautiful’, ‘sexy’ and ‘lovely’. I bask in it, because my Inner Voice is saying, ‘Really? At this size?’ and then just when I’m about to say it out loud, I tell IV to shut the hell up and say nothing.

I must have my ‘fat radar’ set to high frequency because I was rewatching Love Actually the other day as part of my annual Christmas TV viewing and suddenly realised how fat-shamey it was.

From the start, Bill Nighy constantly refers to his ‘fat manager’, Nathalie gets called ‘plumpy’ by her parents, Emma Thompson bemoans her ‘Pavarotti’ clothing, Aurelia chides Jamie for getting ‘chubby’ and her ‘Miss Dunkin’ Donuts’ sister calls her a ‘skinny moron’. The movie even ends with Hugh Grant saying ‘God, you weigh a lot’ to his new girlfriend, the aforementioned ‘Plumpy’.

Someone making this film had some issues, I’d say.

Why is flesh so fearsome? Why do the Overweight Haters think it’s ok to distribute Fat Cards to women on the London Underground? Why is the worst insult a rejected man on Tinder can throw at a woman is ‘ur fat and ugly anyway’? They know it strikes at the fear in the very centre of our being. Even now, if someone shouted ‘fat’ at me, even though I know I’m not, I’d carry around the curse of that for days, weeks after. I know I would.

And then… And then that bloody women’s health report. Even though it rightly acknowledges that obesity is a nationwide, non-gendered problem, and has a significant effect on women’s health, the media has grabbed the chance to say “Women: You Are Responsible For a National Crisis By Eating Too Much.” Here’s what the Department of Health’s Sally Davies actually says in her summary of the report:

Tackling obesity in the population as a whole has to be a national priority, in order to reduce the impact of related, non-communicable diseases on healthy life expectancy and health services.

But guess what? The Daily Fail lays all the responsibility of a national crisis, just before Xmas, on women’s eating. Not the Cumbrian floods, not the terrorist threat – women’s eating: 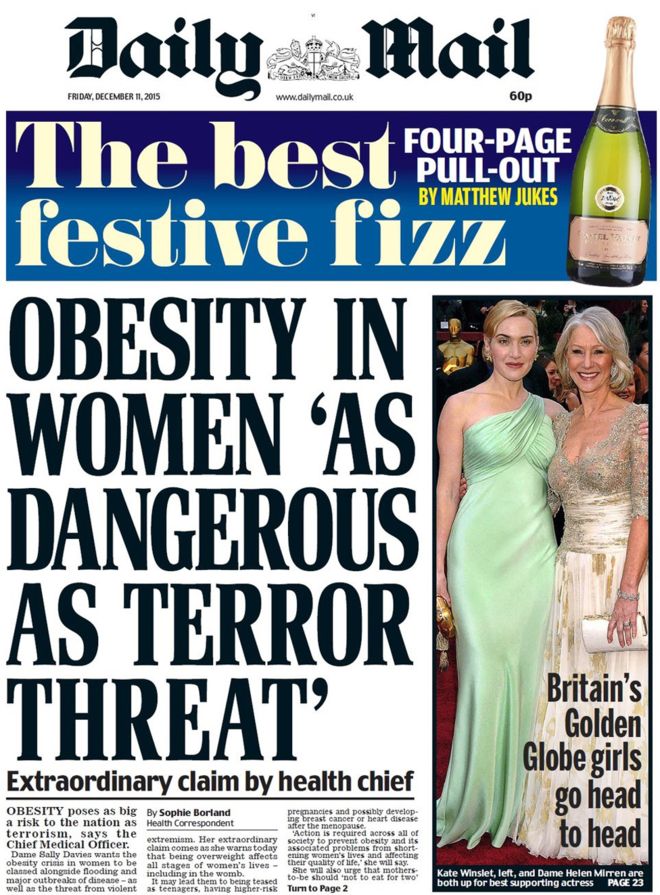 And rather effectively, it’s sandwiched (no pun intended) between an advert for ‘lady petrol’ and two feminine ideals (one of whom has been told to lose weight in the past). It’s a classic, ‘enjoy this, but don’t actually imbibe it if you want to look like this’ schematic.

I’ve returned again and again to the great feminist work Fat is a Feminist Issue by Susie Orbach, first published in 1978, and been amazed at how relevant it still is today: 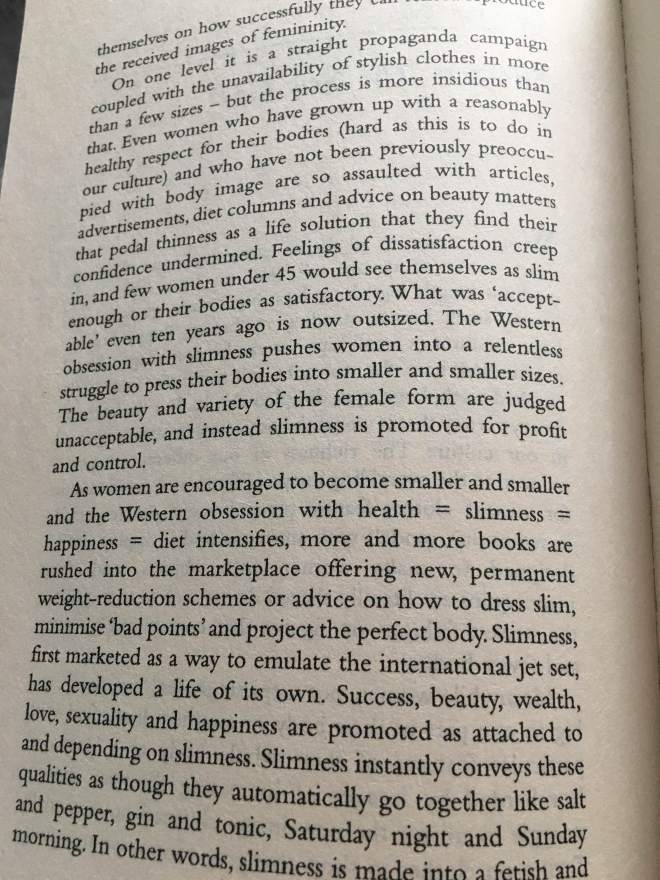 As Orbach goes on to say, “selling body insecurity to women (and increasingly to men too) is a vicious phenomenon. It relies on the social practices that shape a girl’s growing up to make her receptive … they are discouraged from using their body strength to explore the world.”

I have made it a life principle to take up space in the world, to increase my body strength, and to explore as far and wide as I can. On my own. I know that my anti-diet approach to life comes from a response to being body-policed from a young age, and from hearing female friends and relatives comment on their weight and others’ all my life.

I am happy to know a number of younger women who’ve taken a similar ‘This Girl Can’ attitude to life. But I know a hell of a lot more who’ll be monitoring their food intake and not have the strength to climb a wall or run a 10k. But it’s ok, because they’re skinny.

I will say again and again, and if I had a daughter I’d say it every day, that it’s our right (I see it as a duty) to be in the world, to take up space, to be sexual, to get into all its corners. Shrinking ourselves, Alice-like, is not the way to do it.

If only I’d realised this thirty years ago.

4 thoughts on “A Weight of One’s Own”