Please check your email to confirm your newsletter subscription. 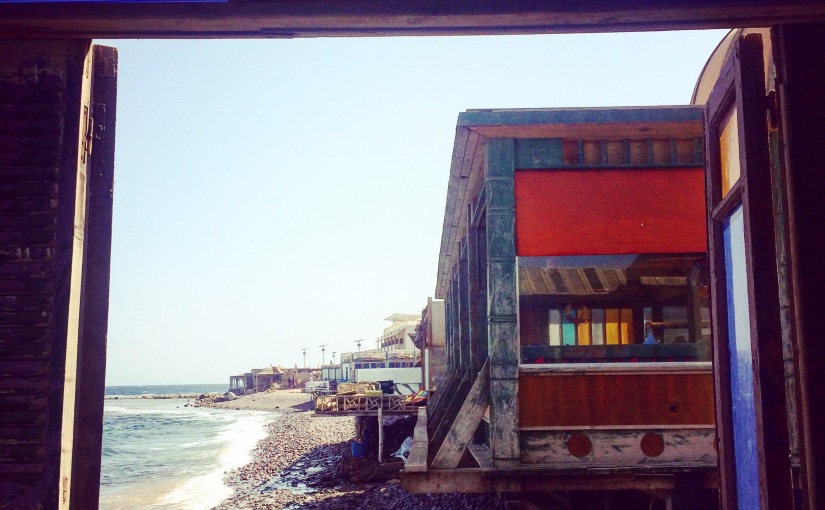 I am spending two weeks in Dahab, on the Sinai coast in Egypt, which is one of my favourite places in the world. I’ve decided to blog about it while I’m here, giving you a daily insight into the town and its inhabitants.

I arrived last night at the wonderful Sheikh Ali hotel. It’s run by a Bedouin family and it has their trademark hospitality. The rooms are huge, clean and their beds are the comfiest I’ve ever slept on. There is a brick cupola in the ceiling that can be lit as a lovely nightlight, if you need one.

Anyway, I spent my first evening catching up with a friend in Crazy Mummy restaurant (formerly Funny Mummy), on the look-out for Bufra, the infamous restaurant dog. She didn’t make an appearance, but her progeny are everywhere. My friend tells me that most of the Dogs of Dahab (as I call them) are related to her. She’s like the Barbara Windsor of Mashraba (the area south of the bridge).

Dahab is a Bedouin settlement on the coast of the Sinai Peninsula that started its tourist life as a hippy hangout for Israelis in the ‘70s, with nothing more than a few shacks on the beach. (The name Dahab is Arabic for ‘gold’.)

The town is 50 miles north of Sharm-el-Sheikh and is most famous as a windsurfing and diving destination. Its popularity grew as Sharm became bloated – Dahab offers a much more peaceful retreat. It is backed by the glorious Sinai mountains and fringed by golden sands. Watching the sun slip behind the mountains has to be one of life’s greatest pleasures. 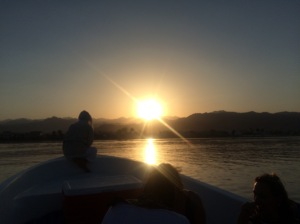 However, the tourism here has been hit by a downturn since the three bombs that went off here in 2006 and then again by the Revolution in 2011. It’s struggling to get back to its former glory. Tourist fears of terrorism are currently rife, exacerbated by recent attacks in other North African and Middle-Eastern countries.

Everyone I’ve met here who works in the town talks animatedly about the town’s former buzz. Teeming restaurants and cafes, plentiful work and tourist money – a town in the prime of its life. I’ve only known Dahab in the last three years and I can see the devastation that the terrorist threat has caused. Although Russian tourists in particular are still coming to the area, the town is fringed with half-built hotels and apartments, and half-closed restaurants and cafes are a regular feature.

It makes me so sad to see it because Dahab has a magical feel like no other place I’ve been to. Well, maybe certain coastal towns in west Wales or Ireland – it shares an other-worldliness with those places and a sense that anything can happen as long as you sit and wait for it. Time slips away while you are staring out over the Gulf of Aqaba.

My friend was working in one of the restaurants close to one of the bombs and he told me about the day it happened, and the devastation he witnessed outside.
He also told me about the brief few days of freedom following the Revolution and how that was quickly curtailed.

He, and all his friends, are still trying to make a living, but many have moved away, usually with foreign girlfriends or wives who can offer them opportunities outside the town. But they always say that they would never even think of moving if they could earn a decent living here.

Conversely, non-Egyptians are moving in, working in the dive centres and the restaurants, attracted by the laid-back lifestyle of Dahab and its hypnotic draw. I said ‘the grass is always greener’ to my Egyptian friend – a new British phrase for him to learn. There must be an Arabic version of that, involving sand or something.

We got to talking about the loneliness of living in a town, even though you’re surrounded by friends; of the importance of an ‘in case of emergency person’ – a ‘loved one’ who will always have your back. I was struck by the fact that we’d both been musing on the same thing in our respective countries, living away from family and friends who’ve moved away, and having friends who have other ‘loved ones’ who are more of a priority than we are. Who are my loved ones? We’ve both asked ourselves this same question.

And then there’s the safety-net thing. I’ve long been aware that I live a safety-net-free life. No one’s there to bail me out, there’s no mega trust fund or wealthy relative to step in just when I need it most, and I’m not a saver. I live for the day, because I might not be here tomorrow. My friend lives in the same way, but it’s enforced, because there really isn’t another way for him.

One thing that always strikes me every time I come to Dahab and meet more and more of its residents is how we are all basically the same. People living a life in a place. Some of us luck out in terms of opportunity or wealth, some of us make it happen. For some it refuses to happen despite their best efforts.

I always think of my friend’s response to this circumstantial stuff, accompanied by a trademark shrug: